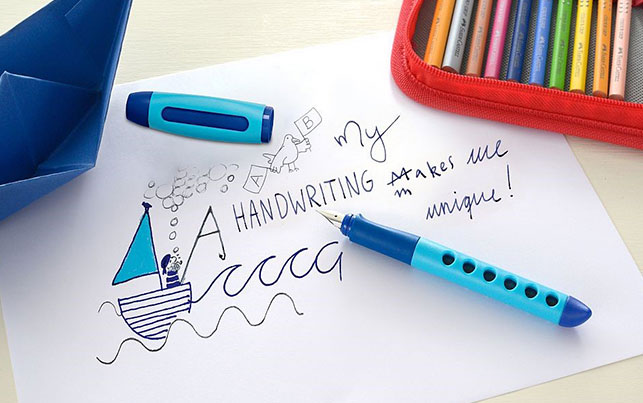 Every year on January 23, International Handwriting Day is celebrated around the world. Under the auspices of the Writing Instrument Manufacturers Association (WIMA), the initiative has been working since 1977 to highlight the influence of handwritten writing on our lives. Even though computer fans praise the advantages of all digital things, neuroscientists warn that neglecting handwriting could impact reading and learning skills

No doubt you have recently jotted down a shopping list, written a post-it note, corrected your child’s homework or quickly scribbled a few notes in a meeting. But hand on heart: When was the last time you wrote a long letter by hand?

One thing is for sure: New digital capabilities allow us to produce texts, in professional life especially, at such a speed that they are increasingly replacing handwriting.  It does not really matter – one might think – which tool a person uses to write as long as the quality of the text is right.

Yet the experts disagree as pens and keyboards activate different cognitive patterns. “Handwriting demands complex gestures that simultaneously trigger sensory, motor and cognitive impulses,” says Edouard Gentaz, scientific director of the French research organisation CNRS and developmental psychology professor at the University of Geneva. A child does not work with a keyboard in the same way. Instead of forming a letter using their visual memory in accordance with their fine motor skills, they press a key – a movement that is always the same regardless of the letter. Graphic options are also limited: you can’t write backwards with a computer, nor into the margins, overlap or deform writing; you cannot cut out the paper, crumple or tear it – in short, you cannot make free use of its three-dimensionality.

The differences do not end with the finished text, either: computers only deliver the final result, pens and paper, however, visibly reflect the long working process with all its phases of correction. “Handwritten material is better structured in terms of thought and content and is demonstrably learned at the same time, in contrast to typed material. Above all, the new technologies of writing must be methodically placed and taught in the right dosage. It

remains: Writing and drawing by hand is a basic competence for many things, and developed and thought language succeeds primarily through the highly complex fine motor skills with the hand,” says Stephanie Ingrid Müller, art and media educator from the Mediastep Institute in Nuremberg.

American journalist Anne Trubek invokes the benefits of computer writing in an article – this ‘cognitive automaticity’ that, according to her, makes it possible to think as quickly as possible, freed from the constraints of writing that often make us lose our train of thought right in the middle of the development process.

Some expert neuroscientists are sceptical, however. They believe that renouncing handwriting will have consequences regarding the ability to read and learn. Marieke Longchamp and Jean-Luc Velay, two neuroscientists at CNRS and the University of Aix-Marseille, showed in a study with three to five year olds that children who copy letters can recognise them again faster than the control group, who exclusively used a keyboard when learning letters. A study with adults learning Bengali or Tamil characters produced the same result.  Scientist Edouard Gentaz speaks of a ‘physical memory’.  The idea of remembering through movement also had a strong influence on the educational theories of Maria Montessori.

Some scientists even go one step further. They assume that not only reading ability will suffer, but also the ability to learn. Americans Pam Mueller and Daniel Oppenheimer studied a group of 300 students at Princeton University and the University of California; they discovered that the students who made handwritten notes during lectures found complex thematic questions easier to answer than those who used a computer for note taking. The scientists have a simple answer to this: manual notes mean that the material is already mentally processed; after all, the text must be meaningfully condensed from the start. The keyboard users, however, tended to type a lot and to write verbatim transcriptions, which prevents reflective mental work.

Yet scientists are cautious about drawing general conclusions from these initial findings: “There is currently no study that clearly demonstrates that the use of pens or keyboards changes our text comprehension or thought patterns,” says Edouard Gentaz.  Despite the omnipresence of computers, he still does not believe that handwriting will disappear. He thinks the computer keyboard is a transitional phenomenon: “Touch screens and styluses will herald a revival for gestural writing.” Hand-written and hand-drawn things are, according to the CNRS scientists, also far more current than many realise. Graphic design, illustrations and calligraphy are more popular than ever. Maybe this is simply because what we produce manually has something a boring keyboard doesn’t. How so? Manual work reaches us on an emotional rather than objective level: it communicates with charm, personality and intentional imperfection.