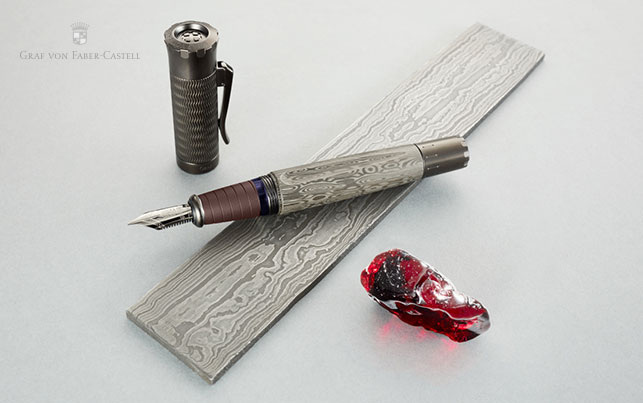 Founded in the 18th century, A.W. Faber became the largest manufacturer of wood-cased black lead and colour pencils. Baron Lothar von Faber turned the humble pencil into the world’s first brandname writing instrument and created a series of fascinating products that remain classics to this day. Since its first edition in 2003, the Pen
of the Year has gained a special status among connoisseurs of fine writing culture. Each limited edition tells the tales of eras and peoples whose deeds shaped the history of humanity.

The Pen of the Year 2021 is inspired by medieval knights, their heroes, myths and legends. The young men’s training took 14 years. In addition to hunting, riding, loyalty, spirituality and martial arts, it also included dancing, swimming and climbing. Upon completion of the training at the age of 21, the men received their knightly accolade ennobling them.

In the Middle Ages, the strongest prevailed, therefore skilful sword fighting and the nature of his weapons played a central role in a knight’s life. The Pen of the Year 2021 is inspired by the impressive armour of the age of chivalry. The writing instrument’s brown grip zone recreates the leather strap on the sword’s grip and prevents the
pen from slipping while writing. The Pen of the Year’s end piece is adorned with a red, faceted garnet with sunray cut. In the Middle Ages, this precious stone embodied light and truth and was used for jewellery, weapons and burials. Due to its hardness and high refraction of light, the valuable garnet was also called a “carbuncle”, which
refers to a gemstone with magical properties capable of providing its own illumination.

During battle, a knight was protected by his armour including a helmet, shield and weapon. The extremely heavy chain mail, which saved the lives of many medieval knights, consisted of around 20.000 steel rings. The Pen of the Year’s cap is reminiscent of the delicate structure of chain mail. Its matt, anthracite-grey surface is refined by a durable PVD titanium coating. The knights’ moral standards were shaped by military virtues, such as honour and courage, as well as by decency, humility and modesty. Thus the virtuous education of knights also strengthened their social life and ensured their noble behaviour befitting their station.

Life in medieval castles was tough and demanding for knights. Strategically placed, their construction was aimed at defending against attackers. The matt, anthracite-grey end pieces of the writing instruments’ cap and barrel are reminiscent of a castle tower’s battlements.  They are refined by PVD titanium coating, which changes ever so
slightly during use. The fine grooves on the barrel’s end piece appear like arrow slits. Another element inspired by knights: the top of the cap is adorned by the “heraldic cross”, also known as the “cross of hope”, as it was considered a symbol of hope in the Middle Ages.

There are many myths and legends surrounding King Arthur and his Round Table. The tales about Guinevere, Lancelot and the eternal quest for the Holy Grail, in which Lancelot’s soon Galahad plays a major role, are only some of the many stories that make up the vast body of Arthurian literature.